“The Young Vincentians as the protagonist of the present and future of the SSVP.” 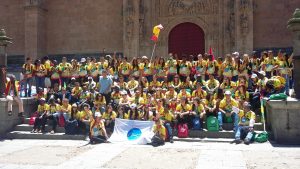 More than 100 Youth Leaders from 87 countries travelled to the Center of Spirituality of the Congregation of the Mission in Salamanca, Spain for the 2nd SSVP Youth International Meeting which lasted from June 16, 2018 until June 21, 2018. Prior to the travel, the youth leaders formed a Social Media group where they started communicating, introducing themselves and the works that they do in their respective countries, sharing information on the preparations that they are doing, and showing their great excitement for this great event.

The meeting started last June 16, 2018 with a morning prayer that focused on reflections about the “Man of the Beatitudes”, Blessed Pier Giorgio Frassati, who is also the patron of the SSVP Youth. The Opening Ceremony followed with messages from the President of the SSVP Provincial Council of Salamanca, Bro. Juan Manuel Gomez – President of the National Council of Spain, Bro. Willian Alves – International Vice President for the Youth, and Bro. Renato Lima de Oliveira – 16th President General of the Council General International.

Bro. Renato reiterated the support of the International Council General for the works, projects, and initiatives of the youth members of the Society telling them to “be creative, inspire many other young people to join the Conferences of the Society, be the leaders that the SSVP is looking for, and be zealous about all you are going to do”.

The opening Ceremony was followed by a short talk from Mr. Rafael Ortega, Director of the Catholic Congress and Public Life, who shared about the challenges of the Society in Europe. He encouraged all young people to be involved and be at the forefront in the works of the Society.

Bro. Sebastian Gramajo – Deputy Vice President of CGI, gave the first lecture focusing on the topic “The search for holiness of life in the SSVP”. He opened his speech with the words “Be holy, for I am holy” quoted from the book of Leviticus. He concluded it with the words “let us journey together towards holiness”.

Ms. Isabel Garzo form the National Council of Spain presented next about “The role of the Youth in the origin of SSVP and the role of the Youth today for the renewal of the SSVP”. She shared the connection between the young founders and the youth of today emphasizing the motivations of the young founders and comparing it to what motivates the youth of today.

After the 2nd lecture is an Open Forum with the President General. Bro. Renato started with an excerpt from the book of Proverbs: “A man’s heart plans his way, but the Lord directs his steps.” He shared God’s design in his life from the day he started in the SSVP until he becomes the President General. Bro. Renato then humbly addressed the questions of the 5 youth representatives chosen from each continent.

After the Open Forum is the International Youth Video Conference attended by more than 30 groups from all over the world. Young people from Brazil, Lebanon, Australia, Philippines, Kenya and England shared some of their activities that promoted peace, which is the topic of the Video Conference.

A dinner party ala Spanish style with Flamenco dancing capped the first day of the meeting.

Day 2 commenced with the Morning Prayer focusing on the life and charism of St. Vincent de Paul. It was followed by a lecture from Fr. Ralph Germanos, advisor of the Lebanese youth, who gave an input on the importance of spirituality and charism in the life of young Vincentians serving in hope saying “If we are not open to the higher love that fills us, how can we serve our brothers and sisters? We cannot give what we don’t have.”

The afternoon of Day 2 includes a celebration of the Holy Eucharist at the Cathedral of Salamanca with a message from the Vatican, a tour around Salamanca, shooting of some videos for Youth promotion, and a light show called “Luz y Vanguardias” in Plaza Mayor de Salamanca.

Day 3 started again with the Morning Prayer, this time focusing on the life and spirituality of Bl. Frederic Ozanam. It was followed by the presentation of the newly appointed Territorial Coordinators of the International Youth Commission, all reporting to Bro. Willian Alves and their respective International Territorial Vice Presidents.

A lecture from Bro. Eduardo Marques – Coordinator of the Strategic Plan of the CGI, presenting about “the Young Man as a Vincentian Leader” followed this presentation. He shared about some leadership principles that guided the lives of many inspiring SSVP members. This lecture was followed by another workshop, a planning meeting of the youth leaders divided by regions. The discussions, this time, were led by the newly appointed Territorial Coordinators of the International Youth Commission.

The 3-day youth meeting was concluded by messages from Bro. Juan Manuel Gomez, Bro. Jose Ramon Torremocha – the 14th President General, Bro. Willian Alves who synthesized the whole gathering under the theme “The Young Vincentians as the protagonist of the present and future of the SSVP.”, and Bro. Renato who declared that the International Youth Meeting will now happen every 5 years.

After the formal meetings, the young people are going for a pilgrimage to Avila for Day 4 and a visit to the various Vincentian projects in Madrid for Day 5 which will be concluded by a Eucharistic celebration at the Basilica of the Miraculous Medal. They will all leave on June 21, 2018 back to their own respective countries bringing with them all the learning, experiences and friendships made in this meeting.