The Council General International (CGI) of the SSVP has the immense joy to announce to the worldwide Vincentian community that two Conferences have just been founded in Cyprus. Now, with the entry of Cyprus, the Society of St. Vincent de Paul is located in 154 countries/territories.

The Conference “St. Joseph of the Apparition” was created in the city of Larnaka, and the Conference “Holy Mary” was founded in the town of Nicosia. The two new Conferences were established after the brilliant missionary work carried out by sister Ella Bittar (International Territorial Vice-president for Middle East) and her team, who made visits to Cyprus on October 19, 20 and 21 of this year. 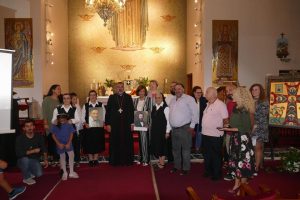 The team participated in several meetings, distributed leaflets and prospects, visited churches and did presentations in parishes. The team spoke about the origins of the SSVP, the history of the founders, the mission and vision of the Vincentians, the Vincentian spirituality, the role of the Council General, the work of the Conferences and the service in hope, that we offer in love to the poorest, all based on the principles of the SSVP.

“I want to thank, first of all, God, for allowing us to achieve this goal, and especially the Catholic Church of Cyprus, which has been providing the necessary support so that we could found these two Conferences”, said Ella. The mission in Cyprus was possible only thanks to the support, encouragement and presence of the Church at our side. It is very possible that more new Conferences will be created in Cyprus shortly, taking into account the excellent openness of the clergy and Catholics in general. The motivation is infectious.

Also the 16th President General, our brother Renato Lima, spoke about this very gratifying news for the SSVP and for the extension of our service to the most marginalized. “The SSVP Plus Project, thank God, has been progressing steadily. We have managed to bring the seed of the SSVP to Albania, Liberia and now Cyprus. We still have other nations in sight. We thank many Superior Councils that have helped CGI in this task, with economic resources and support materials”, said Renato Lima.

We thank, from the bottom of our hearts, the unconditional support of Monsignor Youssef Soueif, Maronite Bishop of Nicosia, who during the homilies on the day of the founding of the Conferences motivated the parishioners to join the SSVP. Monsignor Youssef appointed Father Akl Abi Nader to accompany the Nicosia Conference, and Sister Teresa to support the growth of the Larnaka Conference.

The Republic of Cyprus belongs to the European continent, but due to the work of our Vice-presidency of Middle East, and for cultural and historical reasons, the country will be initially linked to the supervision of our sister Ella Bittar, from Lebanon. Cyprus is a country with a million inhabitants, but with only 8% of Catholics who follow the Maronite rite. We pray to God for new Conferences to arise in Cyprus. The next visit of our sister Ella to Cyprus will take place in the coming weeks.