The El niño weather event, which has left thousands of victims in Peru in the past 20 years, has once more struck the country.  Since December 2016, torrential rains have led to terrible flooding and mudslides. There have been 91 deaths so far, almost 130,000 left homeless with over 176,000 houses damaged or destroyed, not to mention the thousands of hectares of farmland obliterated as well as serious damage caused to public health infrastructure and roads. 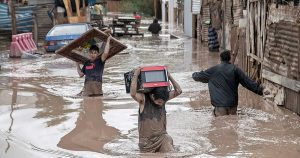 In Chiclayo, one of the biggest cities in the country, in the Lambayeque region, the SSVP mobilised from the start of the rains, identifying the most urgent needs and the most vulnerable people. There were 4 priority areas identified for action: Food, health, education and housing. The evaluation on the ground, and home visits, identified one particular district of the city: “El arenal de la pradera”, and 4 families who were especially at risk. In the first few evenings after the disaster, 142 meals were served to the victims.

With emergency help supplied by CIAD, the aid programme was organised together with the Lambayeque Vincentian Family: the SSVP supplied food for the “dining room”, a popular solidarity initiative created after the tragedy, giving breakfasts and lunches to 65 people for several weeks.

After the emergency work, it was also important to deal with the risks of sickness and epidemics: so cleaning and disinfection kits were quickly distributed to the people affected. Help for medical care was provided for members of the 4 families assisted, who had suffered fractured limbs or injuries requiring hospital treatment. Some of the budget was also given for rebuilding a house that had been destroyed. As regards education, a young Vincentian student was given help to buy new school uniform so he could return to his classes. 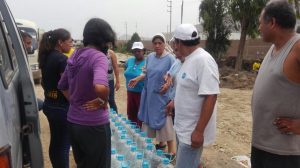 The SSVP’s work is not limited to emergency help, and Vincentian members in Chiclayo are now undertaking longer-term projects to help the people:

A video (link below) produced by FAMVIN shows the local situation, as well as the work of the SSVP. (in Spanish)