On 26 April, Nepal commemorated the victims of the 2 earthquakes which wiped dozens of villages from the map 2 years ago, and plunged the country into mourning.

Over these two years, the general situation of the victims has gradually improved: reconstruction is slow, hindered by logistical problems, such as lack of equipment and human resources, and power cuts. There have been delays in restoring the infrastructure, including the road network, needed to resume operations, and some villages are still cut off from the world.

A partnership with Caritas

After taking an active part in the rescue efforts immediately after the disaster, the regional officers of the Society of Saint Vincent de Paul quickly initiated a partnership with Caritas, in order to improve efficiency on the ground, and overcome administrative obstacles. With an agreement signed in June 2016, Caritas and the SSVP are working together on a project to rebuild houses. According to this agreement, the SSVP is committed to a budget of $772,000, funded by CIAD (International Commission for Aid and Development), gathered from Vincentian donations for the victims.

With agreement from the Nepalese government, Caritas has identified a zone particularly affected by the second earthquake on 12 May 2015, in terms of human loss and destruction: the village development communities of Orang and Bulung, in the Dolakha district, particularly targeting the 5 worst affected areas. The project involves 310 families, who will be materially and financially assisted to rebuild their homes.

In each district, a reconstruction committee has been formed to supervise the programme. The beneficiaries are closely involved: they are helping to resolve problems which arise within the community, identifying households rebuilding their homes and those who are not.

A demonstration house has been erected, meeting earthquake-proof regulations, to provide a model. Training sessions have been organised for the builders and the households receive help from a Caritas Nepal technician who provides expertise in key areas of the reconstruction (choice of site, drawings, etc.). 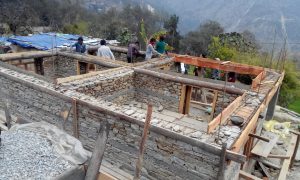 At the same time, Malaysia, twinned with Nepal, launched a solidarity appeal in order to raise funds, collect clothing and goods for the Nepalese to protect them from cold while they are waiting for their houses to be rebuilt.  A visit to the country was arranged to meet Nepalese Vincentians and to obtain a better assessment of needs. This trip, led by Elizabeth Loo (National Twinnage Coordinator for Malaysia) took place in September 2016. The week-long programme included a training session and visits to families in Kathmandu, Godavari and Baniyatar, giving the Vincentians an overview of how the funds have been used. They also brought woollen clothing, computer equipment and the sum of 13,600 RM (3100 USD) raised from collections. The visitors quickly took the measure of the level of poverty and deprivation suffered by their Nepalese counterparts, as well as as the extraordinary commitment they show towards others. Anne Haslam (Christ the King conference – Sungai Petanie, Malaysia) found it a richly rewarding experience: “At the outset we thought we could teach our Nepalese friends something, but we quickly realised that the roles were reversed, and it was we who had most to learn from them. From the first day of our arrival in Kathmandu, it was a humbling and learning process. We were filled with humility and inspired all the more to serve people less fortunate than ourselves”*.

In a country where Catholics are very much a minority (8000 out of a population of 30 million) the Society of Saint Vincent de Paul presently has 13 conferences, and is increasing its service to the poor, with the support of Malaysia and its collaborative work with other Catholic organisations.

* Read the full report > Shelter progress narrative report till May 2017