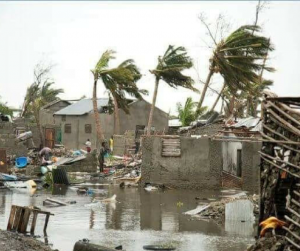 During the night of March 14, cyclone IDAI, one of the worst natural disasters ever recorded, hit the provinces of Sofala, Manica and Zambezia in Mozambique.  Beira, the second largest city in Mozambique, was completely flooded, and the village of Dondo was destroyed.

Cyclone IDAI left a destructive and deadly trail. Over 1,500,000 people have been affected, and some 510 drowned or died from lack of medication and food. This number is growing as the water begins to recede. Several days after the cyclone, there were still flooded villages being helped and evacuated by air.

We have a Council with 5 Conferences in Beira, as well as a home belonging to the Daughters of Charity that was cut off for several days, with no electricity or telephone. Most of the aid has come through the representative of Mozambique’s Red Cross, which is coordinated by the National Institute of Disaster Management.

Beira’s Central Hospital was damaged and some thirty health centers are practically destroyed. The picture is grim. Road destruction is preventing the rapid distribution of supplies such as medicine, food and drinking water.

If you would like to help Mozambique SSVP, contact your national SSVP, or the SSVP Fund for International Solidarity (FIS). More information at www.ssvpglobal.org