In 2016, the Hauts-de-Seine (92) SSVP departmental council (France) organised a training session for its volunteers. This focused on home visits, reciprocal encounter, and the place of listening in a welcoming approach.

Led by Daniel – a retired psychogeriatrician – this powerful and fruitful 1-day training session questioned how we relate to others in our service of isolated people.

Around fifteen French volunteers shared their various experiences of volunteering (home visits, welcoming people at food banks during the day, outreach to the homeless, etc.) as well their feelings about how they encounter vulnerable people.

Two volunteers from the Hauts-de-Seine spoke about their commitment. Jean-François has been making home visits for some years and believes that supporting people must involve reciprocity. As he explained: “[…] the people we help must also have an opportunity to help. We have to give isolated people the chance to give something back in turn […].” Jacqueline, another volunteer, added: “It’s easy for us volunteers to give, but the gift has to be two-way.”

Reciprocity therefore seems essential in any encounter, although not everyone thinks so. Other people, such as Thierry – a food-bank volunteer – had a different point of view. Every Monday morning, Thierry welcomes people in need who come to collect their weekly food parcels. He recounted how, on several occasions, he has welcomed people living on the streets and alcoholics whose smell repulsed him. In such situations, he admits finding it hard to relate to these people and settles for just giving them their food parcel, without taking the encounter any further.

Lucie Dognin – president of the Hauts-de-Seine SSVP departmental council – replied to this point. She reminded volunteers that the SSVP is not just about distribution, but finds its real purpose in the social bonds formed with its beneficiaries. As she said: “We must put people at the centre of the SSVP’s work, prioritising human contact, restoring personal formation and spirituality to the heart of our action.”

He explained that supporting isolated people means forming relationships with them, walking alongside them to go where they want to go. Helping does not mean doing ‘instead of’, but doing ‘with’. It was a very instructive day, forcing volunteers to question their ability to listen to the people they meet and help.

How can we identify ‘invisible’ people (the lonely, isolated single mothers, people living in great physical or material hardship) and combat their isolation? According to Jean-François Serres – national spokesperson for MOnalisa (mobilisation nationale contre l’isolement social des âgés [national mobilisation against social isolation of the elderly]) – these people are a “new form of silent poverty in contemporary society.”

Michel Lanternier – national president of SSVP France – observes that “the development of technology, robotics and social media may lead us to believe that people are more closely connected than ever before, and that loneliness can be relegated to the history books. Unfortunately, loneliness is a growing problem and now affects some 5 million people, i.e. 1 in 8 of the French population.”

François Le Forestier – head of the hardship hub at the association Aux Captifs, la Libération (liberty to the captives [Is. 61:1]) – draws a depressing conclusion: “People who hide away no longer want relationships, either because they’ve suffered too much or because they feel ashamed and guilty. And we must respect their wishes.” But how far should we go?

Today, how can we identify lonely people and start the process of supporting them? The SSVP recommends that anyone who wants to start visiting people at home to combat their loneliness should turn to the various human, regional and social networks: local links (neighbours, family, friends, word of mouth), town halls and medical/welfare teams (social workers, teachers, district nurses, pharmacies, doctors, etc.).

Become an SSVP volunteer in your region: Our locations

The President General issues an...

Covid19. Chile. Reinventing themselves to...

The President General issues an Extraordinary Circular Letter kindly dedicated to the presidents of the Vincentian Conferences, about the Covid-19 pandemic 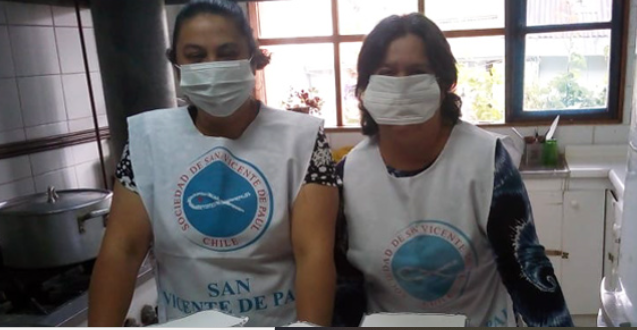 Covid19. Chile. Reinventing themselves to keep on serving