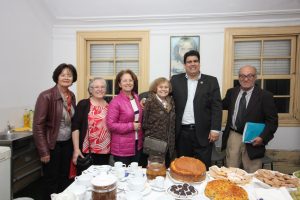 The Assembly of the Republic of Portugal, through the Committee on Constitutional Affairs, Rights, Freedoms and Guarantees, awarded to the Vincentian Assistance to Prisoners (OVAR), which is a special work linked to the Central Council of Oporto, the “Human Rights Award 2018”.

The OVAR was recognized by the Portuguese Parliament for acting with the penal population and granting support to the prisoners and their families in the three prisons in the north of Portugal: Custoias, Saint Cross of the Bishop and Pazos de Ferreira.

By publicly recognizing the work of the OVAR, the prize is, in fact, recognition of the charitable actions carried out by the Society of St. Vincent de Paul on Portuguese soil, bearing in mind the exceptional work of humanization of the poorest, in particular, of the inmates.

“The great work developed by the OVAR, in the promotion and rehabilitation of prisoners and support for their families, gives an account of the importance of the Vincentian spirit, of voluntary work and of Christian solidarity together with those who suffer,” remarked the 16th General President of the SSVP, our brother Renato Lima. “In many parts of the world, the SSVP provides excellent support for prisoners and former inmates, with the aim of providing conditions for a decent and productive life,” said our president Renato Lima.

The prize will be awarded on December 10, 2018, in a ceremony presided over by the president of the Assembly of the Republic of Portugal, in Lisbon. The General Council congratulates the Vincentians of Portugal on this excellent news!