The Ozanam Center of Sant’Antimo welcomes many young people in difficulty. 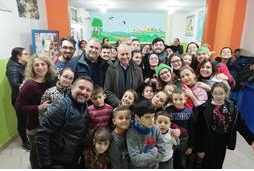 This center has been working with needy families and children for 30 years. Never shying away, facing each situation with passion and tenacity, almost always difficult and delicate. At the Ozanam Centre in Sant’Antimo (province of Naples), we find children with sad and desperate stories behind them, where the volunteers’ smile and human contact can give them confidence and courage to move forward.

The peculiarity of this Center lies in the richness of its diversity, where the person coming in is not an enemy, but a person who deserves to be helped and accompanied in their long, tortuous and difficult path of growth. Antonio Gianfico, the National President of the Society of St. Vincent de Paul and founder of the Ozanam Center, doesn’t tire of repeating this in the Osservatore Romano: “That rediscovery of humanity lives in every single person. Today, unfortunately, we live in a society where human relations tend to weaken, so the Vincentian volunteers are convinced that it is necessary to have frequent contacts that give us the opportunity to appreciate others.”

At the Ozanam Center, some forty volunteers, led by Antonio Gianfico and assisted by Mónica Galdo, who is part of the founding group, which was created at the end of the eighties, a few steps from the parish of San Vincenzo Ferreri, in the populous neighborhood “167-219

The Center was created as an out-of-school project for disadvantaged youth in the district, where they can do their homework with the help of volunteers, but they also have the opportunity to attend art workshops, theater workshops, sports activities and excursions that even involve the families.

A cultural recovery for a generational redemption. “The family is not always aware of what we do for their children. A few years ago – says Gianfico – we had two brothers from the neighbourhood who attended catechesis classes and received the sacrament of Communion organizing a party in our center. We invited their parents, who until then did not know anything about what the children were doing with us, even though we had tried to involve them several times.”

The seriousness, dedication and gratuity with which it operates in the area has allowed the Ozanam Center to become an important point of reference and connection with the neighbourhood, thanks to the collaboration with the schools and the message of charity that it disseminates in its continuous support to families.

Antonio Gianfico, together with his collaborators, is committed in the first line against the creation of ghettos, against the loss of families and young people who live, due to particularly difficult economic and social conditions, the desperation of having to surrender to total oblivion. “God has invited us to be guarantors of the poor and marginalized.”

The Vincentians of Sant’Antimo carry out many initiatives aimed at the recovery of young people. In particular, with the project ‘Bibliote-casa’, a library that lends books thus walking into the citizens’ homes, but it is also a place where you can attend courses in journalism, watch videos, read or discuss on different social issues. In addition, in order to disseminate the concept of volunteering in schools, regular meetings are held to sensitize young people about the importance of supporting others. “It is not necessary that all young people become volunteers – concludes Gianfico – we are interested in being impressed with the concept of proximity.”