Second Edition of the ‘Charity in Hope’ Medal 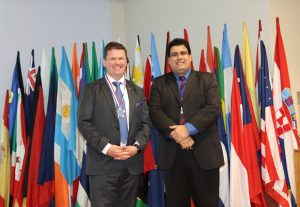 On 14th June, the ‘Charity in Hope’ Medal was awarded to the World Organization of the Scout Movement (WOSM) by the CGI Bureau, on behalf of the SSVP. The event was presided over by the President General International, Renato Lima de Oliveira, accompanied by Joseph Pandian, the Vice-President; Bertrand Ousset; the Secretary; and Larry Tuomey, the Treasurer. The distinction was bestowed to Mr. Craig Turpie, the Chairperson of the Scout Movement. 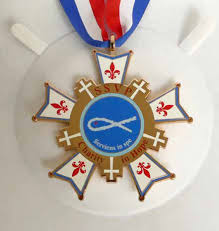 The initiative to award the Medal was inspired by the desire to express recognition for other people or institutions that, being an example of ‘serving in hope’, carry out actions for the benefit of the poorest, while strengthening ties with other groups or entities with which the Society shares common goals.

Our President General stressed that Scouts, founded in 1907, “being an example of helping young people, are distinguished by their initiative, courage, discipline and pursuit of personal development. Their mission, vision and values are very much in line with those of the SSVP, since their main foundation also consists of creating a network of friends, working for and in the service of charity”.

Craig Turpie showed his delight and gratitude on behalf of the 50 million children making up the movement: “Scouts do not seek gratitude, they do what they have to do, true to their promise, to help others. A recognition of this kind is a confidence booster for us. It is an honour, for me, to accept it on behalf of the Scout Movement”.

Both institutions, the SSVP and the Scout Movement, being true to their charisms, made a firm commitment to continue their collaboration and joint actions.

The “Charity in Hope” Medal is awarded to those people or institutions that have been previously proposed by the different Superior/National Councils. The deadline for submitting applications for the upcoming edition is December 31st 2019. The Medal will be awarded in this third edition, God willing, in Nairobi (Kenya), within the framework of the CGI annual meetings.