Nepal is a Hindu dominated country in the Himalayas. The Christian population is less than 2%. The Vicariate of Kathmandu has 8 parishes,10 mission stations and 24 submission stations.

The SSVP has its presence in all the parishes and in some  mission stations. These conferences were  in distant locations and difficult to access and most of them were not  at  all lively or active. So an Orientation programme was arranged in Central Nepal on 18th May 2019. ( similar programme was arranged in East Nepal in Feb.2018) which was found to be very useful as this was the first of its  kind in Nepal .

The Programme was inaugurated by the  Rev. Fr. Silas Baugati ,Vicar general of Kathmandu  Vicariate and attended by more than 40 Vincentians. Some Catholics who wished to join the Society also participated. 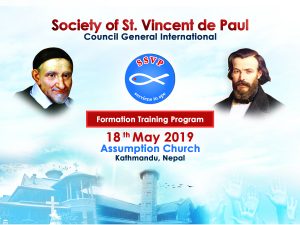