In his new Circular Letter, the President General invites the Vincentians worldwide to seek holiness 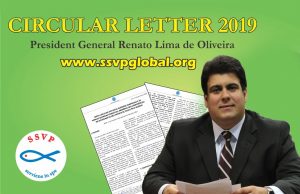 Today, 31st January 2019, the fellow member Renato Lima de Oliveira, 16th President General of the Society of Saint Vincent de Paul, publishes his third Circular Letter, document in which the President communicates directly with all the Vincentians in the world, members of the Vincentian Conferences.

The Letter is structured in five parts: “Introduction”, “General Council News”, “Recommendations to the Vincentians”, “Thematic Year 2019 (Year of Lamache)” and “Conclusions”. In addition to the letter itself, the text contains 25 footnotes, with additional information that enriches the global understanding of the chapters.

“The Circular Letter is an excellent opportunity for the General Council to address the Vincentians worldwide, inviting them to reflect on various topics,” stressed the brother Renato Lima. The Letter of this year focuses on the 180 years of the General Council and on four strategic aspects of the SSVP: communication, training, youth and expansion to new countries.

The Circular Letter is a tradition of the General Presidents. The first of them was written by the co-founder Emmanuel Joseph Bailly de Surcy, 1st President General, on 14th July 1841. Since the beginning of this mandate, in 2016, the Letter is being written in Arabic, Italian and Chinese, in addition to the other four official languages (English, French, Spanish and Portuguese).

Since it is a relatively long document, it is suggested to reflect on the Circular Letter as a spiritual reading in the Conferences and the Councils, in two or three parts. The comments about the Circular Letter of 2019, in addition to the suggestions of topics for the 2020 edition, can be sent to the e-mail address: cgi.circularletter@gmail.com.