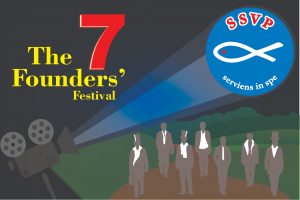 We are approaching the final date (April 30, 2019) for the inscriptions of the Festival “The Seven Founders”, which seeks to focus on the moment when the first Vincentian Conference was founded.

The festival, launched by the Council General International (CGI) of the SSVP, aims at stimulating the knowledge and research, in a playful and talented way, about the origin of the SSVP and the main role of the seven founders: Antoine Frederic Ozanam, Auguste Le Taillandier, Jules Devaux, Paul Lamache, François Lallier, Félix Clavé and Emmanuel Joseph Bailly de Surcy.

The festival is part of the celebrations for the 180 years of existence of the Council General International, founded on July 21, 1839.

Only the active Vincentians in the conferences can participate in the festival. The videos or films presented can be produced in three formats: short film (up to 40 minutes), medium-length film (from 41 to 69 minutes) and feature film (more than 70 minutes).

The deadline for the submission of videos or films to the General Council is 15th July 2019. The audio-visual works will be evaluated by a special commission and the announcement of the winners will take place on 9th September 2019, date of the liturgical feast of Ozanam. The awards range from 1,000 to 2,000 euros.

“We hope that there will be very interesting productions, set in the Paris of 1833, when those seven visionaries had, under the inspiration of the Divine Providence, the brilliant idea of founding the Society of St. Vincent de Paul. The seven of them, without exception, were instrumental in the establishment of this important charity, which today provides relevant services to mankind”, stated the fellow brother Renato Lima, 16th  President General.

Click here to know the rules of the festival. Take part! Do not miss this historic opportunity.

rules of the festival – ENGLISH