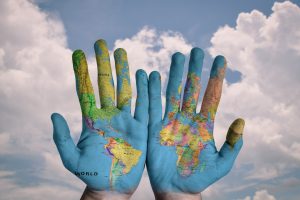 How many countries are there in the world? It’s not easy to answer this question. First of all, what does the concept of “country” indicate? Considering this subject in more detail, the Council General noted that there were big differences in the officially-agreed figures. While the UN recognises 193 countries around the world, the International Olympic Committee has 206, while FIFA (for football lovers), lists 211 countries. Some observers consider that the UN list is “artificial”, since it does not match specific territorial boundaries, and they estimate that in fact there are 324 countries across the world! So this number varies according to the political or social criteria used by each organisation to define what a “country” or a “nation” is. Views differ in this field. Each of the lists available have benefits and disadvantages. But they are drawn up according to criteria appropriate to each organisation.

Since none of these lists fully satisfies the needs of the Society of Saint Vincent de Paul (using the UN criteria for instance, several of our territories are simply not recognised), Council General has decided not to follow existing lists of countries, but instead provide its own Vincentian list of countries, in accordance with its original traditions.

The countries or nations we will call “Vincentian territories”, for the purposes of clarity, are those Vincentian areas which have been formed over time for reasons of history, culture and the development of the association in the country concerned. So the “Vincentian territory” does not always match the “national territory”.

There is a second problem as regards our association. Statistics have been somewhat neglected in recent years. The figures provided were approximate, and were not examined in detail.

Our 16th President General, Renato Lima de Oliveira, wished to clarify the situation and review everything.

The full list of “Vincentian territories”, as you will see, has therefore been drawn up with great care, based on the latest information provided by our 12 Territorial vice-Presidents on the situation of our organisation on the ground.

Council General undertakes to keep it up to date every year, as the Rule requires of us; in order to maintain “an accurate picture of the true scale of the Society” (article 6.2.2 of the international statutes).

Our organisation therefore has a presence today on all 5 continents, in 149 Vincentian territories (figures for December 2018) and 138 UN countries. Here are the numbers for each continent:

Ever since the Holy Spirit inspired our seven founders to establish the Society of Saint Vincent de Paul in 1833, our association has grown continually:

These positive figures could never satisfy Vincentians, since, as Blessed Frédéric Ozanam reminded them in 1835, “Charity should never look back, but always ahead, because the number of its past good deeds is always small, and the present and future sorrows it must relieve are infinite.”

So the task remains huge: so many hearts to be consoled in the world, so many people knowing nothing of the path to holiness offered by Conferences – to serve and meet God by practising works of charity, mercy and evangelisation.

Through the “SSVP PLUS” project, Council General thus continues its mission with enthusiasm, to “develop the Society around the whole world”, consolidating existing structures, re-energising the weakest, and introducing the Society to new countries. There are opportunities at the moment in Greece, Morocco, Vatican and in Kazakhstan (and 15 other countries), and it is up to Vincentians to support these new shoots with their prayers.

The Society of Saint Vincent de Paul has only one desire: that the poor and suffering Jesus, hidden in our deprived brothers and sisters around the whole world, should be loved and served even more!