CGI board meets in Paris

On 8 September, in Paris, at the headquarters of the Council General International, the board met. Some others members were invited to participate in the meeting: Amin de Tarrazi (12th President General) and Bertrand Ousset (CIAD chairman – Commission for International Aid and Development). The minutes were prepared by the collaborator Bruno Fabre. 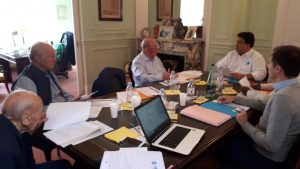 “It was a very productive meeting, with important decisions taken for the future of the General Council,” said President Renato Lima. The next board meeting of the Council General will be on November 17, in Paris.

After the meeting, the members of the board visited two parishes in Paris (Saint Rosalie of Palermo and Saint Anne) to see the social works developed by the local Vincentian Conferences. We thank the brothers Michel and Jerome for the welcome we received.