On last November 28th, something fully exceptional and very much encouraging, regarding those people who work for the expansion of the Society in the world, has occurred: the first Conference of the Saint Vincent de Paul Society was organized in the city of Mollas, in Albania. 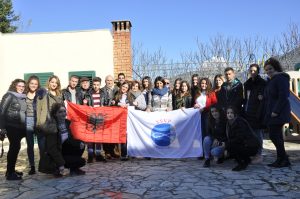 Located in Southern Europe, surrounded by the Adriatic Sea, this country, where the name literally means «the country of the eagles», was, along its history, the region of numerous foreign occupations, which caused the massive exile of Albanians to neighbouring countries, such as Italy. The Catholic Church was interdicted there during some centuries, particularly under the Ottoman  occupation up to the 20th century, when the Republic of Albania was taken over by the communist regime up to 1991.

Based on its history, its geographic location and the movements of the population, the country has always kept relations with Italy. Considering this natural logic, the Italian SSVP, led by the President National, Antonio Gianfico, gave her support and her aid for the organization of the Saint Mother Teresa de Calcutta Conference, which was inaugurated some days ago. 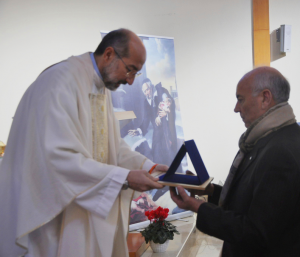 For this occasion, the President General, Renato Lima de Oliveira, sent a message of congratulations:
«It is with great happiness that I am pleased to send you this message of congratulations for the organization of the Conference of Saint Mother Teresa of Calcutta in the city of Mollas, the first group of the Society of Saint Vincent de Paul in Albania, after a formidable work performed by our Vincentian brothers of Italy . […] Do not never discourage yourselves. You will pass through innumerable adversities, but God will always be with you (Proverbs 19, 21). Please remember that our founders had also to live together with many difficulties. The world presents us various challenges, not just those ones related to the economic and material aspects, but mainly the spiritual ones, such as the atheism, the indifference towards the poor people, the modern diseases (depression, stress and anxiety) and the solitude. These new challenges cause that the Vincentian Conferences world wide must be prepared, in order to work with charity and responsibility.

That Mother Teresa of Calcutta intercedes to God in order that the first Conference of Albania grows in love, number of members and quality. It will be an immense happiness for me, in one year, to sign the Incorporation Letter of the Mother Teresa of Calcutta Conference. I would also like, in a short time, to pay you visit. The IGC and I, personally, are at your disposal for anything that the Conference needs and that is feasible.»

During this first year, Albania will be integrated to the Europe 1 – Zone 3 region, so as to be close to its «proponent» country, Italy. Its definitive place, within the international structure, will be discussed at the time of its request for incorporation.